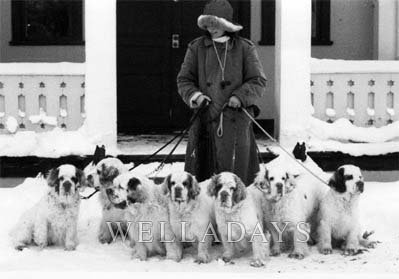 It all started in 1973 buying my first Clumber Spaniel Ch Clumbrolds Josephine Baker – ‘Jakt-Jossie’ to all her friends. Jossie was never bred from but she was a super ambassador for the breed and quite a character. She was also the first clumber in Sweden to be awarded on field trials.

I soon persuaded Margareta Edman to let me have Int Nat Ch Clumbrolds Lille Buddha. To me Buddha was a clumber of true type with no exaggeration but a sturdy and compact dog with the loveliest of heads. Buddha was to win many Best In Shows and from his lines some of the most successful clumbers in the showring and on the field was bred.

My first litter was born in 1979 (Raycroft Silas – Clumbrods Kalaspingla) which brought light to many winners, including Welladays Windgather, BIS at the Swedish Club Show.

One of the pillars in Welladays breeding program was Topjoys Happy Returns. She did nothing in the show ring but became the start of a very sound and typy bitch line. She produced super heads, fronts and proportions. She was a bitch full of herself, always going out for a walk on her own, which most of the times, but happily not always, resulted in finding her way back to the farm as well. There’s a book on its own with all the stories to tell about her.

To be able to keep a high standard and soundness in clumbers I strongly stress that international cooperation is of greatest importance; to avoid inbreeding and to achieve soundness and type. I was introduced to Mrs Rae Furness, Raycroft Kennels, in 1976.

There was a very tight and devoted cooperation between Mrs Furness, Margareta and me, resulting in great success and achievements with our breeding. Although the breed was very small in quantity those days – we were very particular of what specimen to use, most important never to breed an unsound or a bad tempered dog. I can still remember all those late evenings we spent at the Raycroft’s looking into pedigrees, studying all the old breeders’ ideals and breeding programs and looking at old photos of clumbers long forgotten by modern day. All in the love of the clumber breed.

A breed doesn’t start with the first dog you own or just studying the dogs around you won’t do much good either. To truly learn about the breed comes with history, pedigrees, studying type and talking to old breeders.

Through Mrs Rae Furness I came to now Mrs Bets Young of Cypress Woods Kennels, California, USA. Nothing was impossible for Bets. Our friendship was the beginning of American dogs in our Swedish pedigrees and the start for Swedish dogs coming into to the US. Another breeder who has a very good eye for a clumber and who helped me in having Am Ch Companionways Against the Wind, is Mrs Connie Holt-Grenier. Connie also bought a mated bitch Am Ch Welladays Wasaloppa mated to Int Nord Ch Welladays Sunday Bloody Sunday. This litter produced the BIS-winning (American Club Show) Am Ch Companionways Wild as the Wind, one of the most beautiful dogs I have ever seen.

Through the years the Welladays clumbers have achieved a lot of victories in and I am especially proud of being awarded ‘Hamiltonplaketten’ in 1995 by the Swedish Kennel Club. Another memorable time in the Welladays history was the win of the Swedish Kennel Club all breed contest – Breeder of the year in 1987, to follow the 1985 win when we were runner up Breeder of the Year. 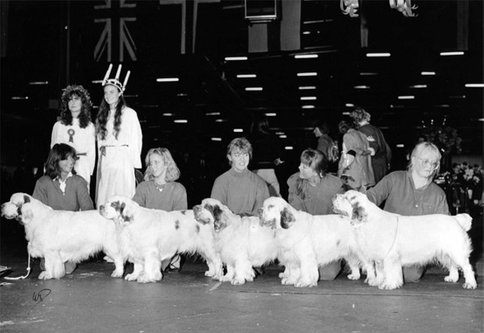 It has always been my purpose to prove my dogs on field trials. To be awarded the ‘Bruksuppfödarpris’ in 1985, proved that my ideal didn’t let me down.

I was also to become an Honorary Member of the Swedish Clumber Club. The club that I, together with two other idealists Margareta Edman and Karin Brostam, formed in the late 70’s.

On this website I have gathered some pictures, for me good representatives for the clumber breed and to show some of my breeding.

All my wins and success would not have been possible without all the help and cooperation from breeders and puppy buyers. For me showing and working clumbers have always been a joyful time.  And not to forget that it is always the same dog you are coming home with after the show/field trial. No matter how the day ended.

AmCh Companionways Against the Wind